There are no words to describe tonight other than amazing!
We had our family game night and it was so much fun.
We started with a Bible game that everyone loved. 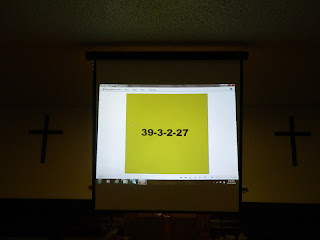 The first number was the number of the book of the Bible, the second number was the chapter, the third number was the verse number and the fourth number was the number of the word in the verse.  After figuring out what the word was, the team ran to get that item up to the front first.  We definitely had a lot of laughs as each team tried to tried to figure out all the numbers and then find the items and get them first!
We then ate all the goodies everyone had brought.  As we were eating the church phone rang and I ran to pick it up.  It was a lady who wanted to know if we were open and if the Pastor was available to talk to.  My husband talked to her for a moment and a within a few minutes she had arrived and went into my husbands office to talk to him.
As soon as it got dark we then took three hundred glow sticks and scattered them all over outside. 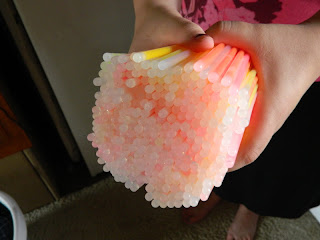 The kids got into teams and had to hold hands as they ran all over trying to pick up the glow sticks.  Of course to make it a challenge they only collect ten glow sticks before having to run them inside to their teams bucket and if one of the "mean guys", (Chandler or Mason) caught them as they were running, they had to give them half their glow sticks. 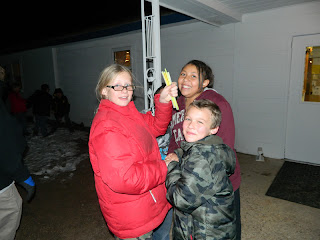 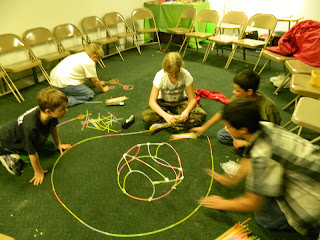 After they finished finding the glow sticks and were frozen to the bone they all came in and I gave them a bunch of connectors
and they created castles and rocket ships and various other things with the glow sticks.  They were so occupied with this that we didn't hear a peep out of them for over an hour!
Of course while the kids were playing, the adults were playing games too and ended the night by watching a Christian comedy video.  I really thought a couple of our people were going to die laughing!
My husband finally came out of his office with Elizabeth
and told us that she had just gotten saved! 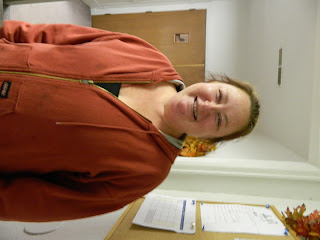 Elizabeth had been at home tonight when a man came to her door and told her that he was the previous renter and he had been using the apartment as a place of devil worship.  As she talked with the man she felt that there was actually a demon there and she became very scared.  She went to the store to find candles with a picture of Jesus on them as she said she knew if she burned them she would have peace in her house.  After going to several stores, she could not find the candles and did not want to go home.  She called us to see if we could somehow help and my husband was able to take the Bible and answer her questions and then was able to show her how she could have a personal relationship with God through Christ.  With much weeping she bowed her head, repented of her sins and asked Jesus to be the Lord and Savior of her life.  When I talked to her a few minutes later she told me it was the best decision she had ever made in her life!  Amen!
She told me that we were the first church she called and that we were there and answered the phone.  It was no coincidence that we had Family Game Night tonight and that we were there to meet this lady's need.  So excited to see all God is doing in our church!  It's simply amazing!﻿
﻿
﻿
﻿
﻿
Posted by Amy-Marie at 11:15 PM