I can not believe that the week is over already!  What an amazing week we had, and as always at the end of VBS, I am sad to see it end!  We had over 36 kids today and a total of 50 kids and 17 teens registered all week.  We had 11 kids and 1 teen saved!  Thank you Jesus!

Today was crazy turpin day and there were some crazy ones!
My favorite was Thomas who used a Walmart bag for his turpin. 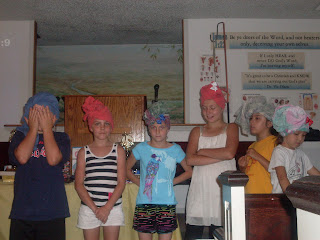 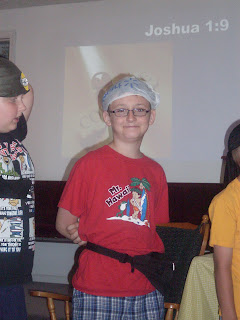 The last day of our missionary story was so exciting as we saw Daniel beaten for believing in Christ but through it all he stayed strong and never denied Christ or his faith. 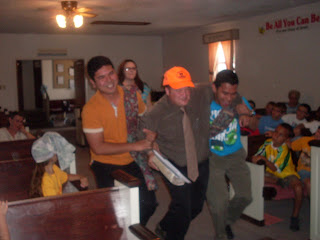 Doc Vic operated on a Muslim priest who had appendicitis and was able to save him.  Later he was able to show him in the Bible
how to be healed and saved spiritually too! 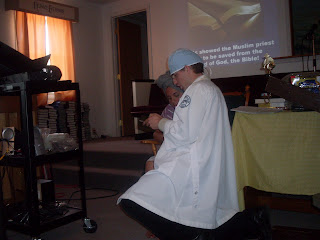 Mr. Nate finished the Bible story about Paul and the kids learned that we need not fear because God has promised to always be with us.

Instead of cookies and kool-aid and game time today, the kids were able to go to the trading post to spend all their hard earned Bible bucks. 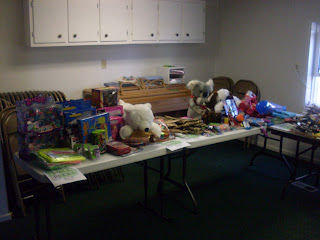 There were six tables stuffed full of stuff, each table a diffent price.
I wish I would have gotten pictures of the kids running around and buying all their stuff but it was total mayhem!  The kids had a time limit and had to try and spend all their bucks before time ran out.  When time was called, all the kids paid Mr. Nate the rest of their Bible Bucks for a chance to participate in the treasure scavenger hunt.  Mr. Nate threw more stuff on the lawn and let the kids run and stuff what they could in their sacks.  All the kids had sacks that were overflowing! 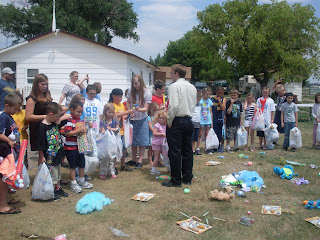 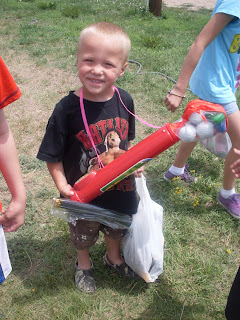 Before the kids left we posed for a group picture of the all the kids and helpers.  After such a long, busy week I am always glad to be done with VBS week but I truly love each of these kids and wish I could see them everyday and teach them about Jesus! 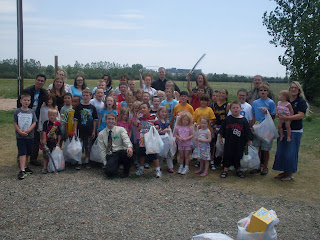 After we took all the kids home we fed the missionaries
and cleaned the church in preparation for the Awards Ceremony.  It was wonderful to see all the parents come and support their kids in VBS.  I made sure that I walked around the sanctuary and talked to each parent individually and let them know how much we had enjoyed having their child at VBS.  My husband gave a wonderful salvation message based on Colossians 2:8 and pleaded with the adults to see their need to repent and be saved from their sins. 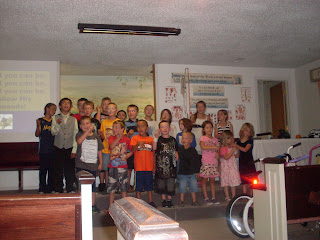 The kids said each daily memory verse and sang the scripture song
that went with it.  The kids then recieved awards for coming to VBS and also for saying verses.  The kids that memorized the most in each class got a Bible and the child that said the most verses in K-3rd grade and 4th - 6th grade also got a trophy.  Also a prize was given to whoever brought the most visitors. 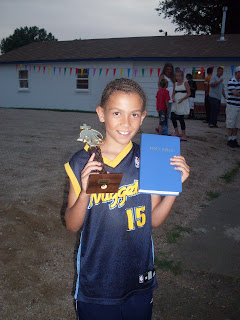 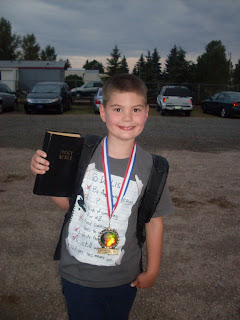 A medal was also given to the teen who helped most in VBS, both with the kids and the teens.  This year Justine won the award for being an amazing teen and helping wherever and whenever she could.﻿ 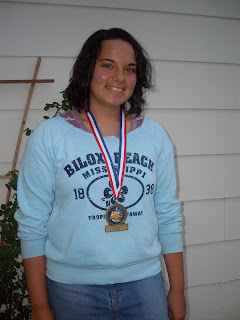 For the next month we will be busy visiting every parent that sent their child to VBS, witnessing to them, inviting them to church and giving the awards to the children who were not there tonight.

I wish I could say that tomorrow I was going to sleep in,
not cook and just take the day easy and not do much of anything but our missionaries from the Philippines will be here for the next several days and we will be seeing to their needs.  Brother AJ will be preaching for us Sunday morning and I so excited to hear him!