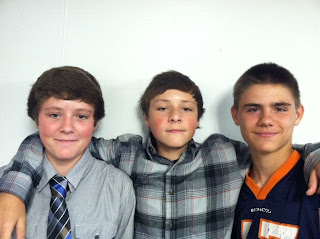 These boys are such good friends at church and now they have something even more special in common.  Tuesday they each got saved!  One of the boys was very convicted by the revival preaching and even though he had "said' the sinners prayer before he was not sure of his salvation.  Pastor Chep talked to him and told him that saying the words of the sinner prayer does not save a person but that it is truly believing and accepting what Christ did on the cross and repenting and asking for forgiveness.  The boy got saved and the glow on his face was amazing when he came out of Pastors office!  His brother was also at the church that day and even though he said he was saved his mom wanted him to talk to Pastor too.  Again, he had said the sinner's prayer when he was younger and then last year at camp had been convicted he wasn't truly saved but because he had told everyone he was saved he was embarrassed to admit he really wasn't.  Pastor Chep showed him several things in the Bible to answer his question and he too got saved!  Later that afternoon we had another boy come to the church and as I was sharing how the other two teens had gotten saved he got a funny look on his face.  He too had given a testimony of saying the sinners pray when he was younger but when I asked him if he knew he was saved, he said he knew he wasn't.  He too went into Pastor Chep's office and after being shown out of the Bible how to get saved, he bowed his head and asked Jesus into his heart and life!  Such an exciting day to see these young men come to a saving knowlegde of our Lord and Saviour!  ﻿