For our June Ladies G.A.B. Night, I gave a devotion on
2 Chronicles 7:14 and 2 Peter 1:3-5.  We talked about how we are God's people but how far away from virtue we have gone.  It was not the devotion I had planned on giving as I had another devotion written and ready to give.  After God pressing on my heart all day not to give the devotion I had already prepared and me telling God I didn't want to write another devotion, I finally sat down a couple of hours before our meeting with my Bible and concordance and wrote the devotion I felt God wanted me to give.   Several ladies approached me afterwards and thanked me as they said the devotion had touched their hearts.  I am so glad I listened to God and brought the devotion He asked me to give. 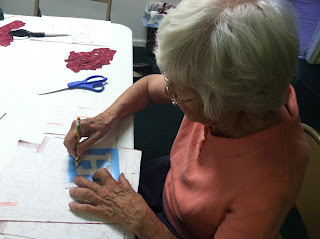 For our craft we worked on a 4th of July Banner
with 2 Chronicles 7:14 on it.  After backing fabric with double sided interfacing we traced all the letters we needed for the verse. 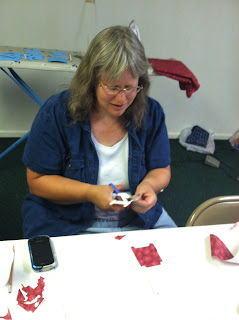 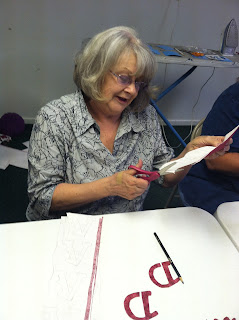 We then cut out all the letters.
This verse had so many words and took so much time just doing the letters.  All the ladies were fabulous and everyone took letters home to finish cutting them out so we could finish the banner by this weekend. 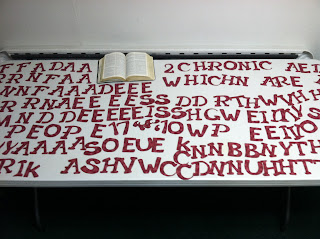 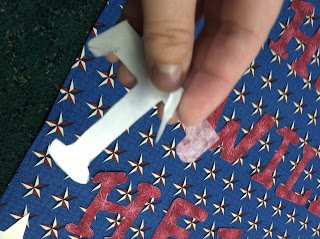 I placed all the letters on the background and rearranged them until I got them positioned where I wanted.  I then peeled the backing of the letters. 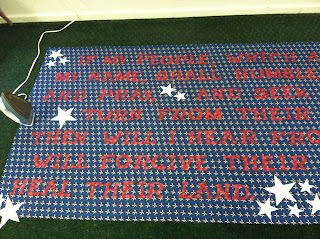 I then ironed all the letters and stars onto the background
to permanently stick them in place. 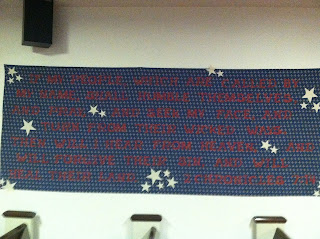 I know, I know, the background is too busy and almost swallows
the words but it really does look good.  The picture really does not show how good it looks but my husband loves it and since he is the one who asked us to make it, I think it turned out quite well.
My husband has asked us to make another banner for Thanksgiving
so I will definitely be more careful to pick a plainer background
that will make the words pop more!
﻿
Posted by Amy-Marie at 10:26 PM