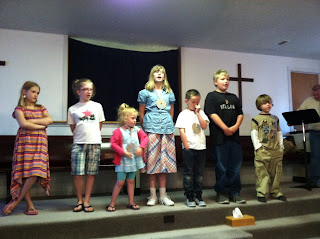 Is it okay to say I was a little disappointed last night?  For most of the year we have had between eighteen to twenty five kids participate each night in Bible Adventures but last night for the award ceremony we only had six of our kids show up and one visitor.  Seven kids!  All the other kids had Scouts or sport activities or the parents simply didn't feel like coming.  So sad to see that God is so far behind on today's list of priorities!  We have no time for the one who gave us all our time, time we are supposed to be using to give him glory and honor and praise. (Revelation 4:11)  Even though I was disappointed not to have all our kids there we still have a great time! 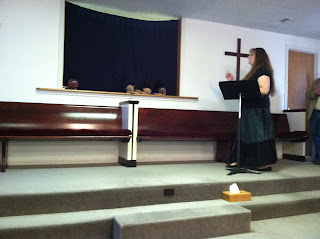 Our puppets gave us one last skit as we talked about Paul
and how Paul's life was never the same again after he met Jesus.
In 2 Timothy 4:7 Paul said, "I have fought a good fight, I have finished my course, I have kept the faith:".  What a wonderful example
for us as we run this daily race of life for God! 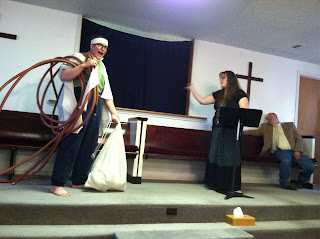 Of course Lawrence came and told us he was off on an adventure
for the summer and showed us everything he was taking for his trip.  I really had no idea what Lawrence (Mr. Chandler) was going to come out and say or do and I was having such a hard time being serious as he had me
and the rest of the congregation laughing so much! 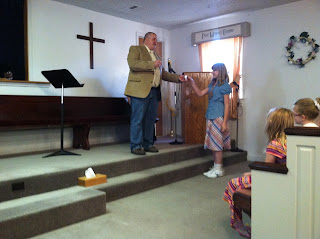 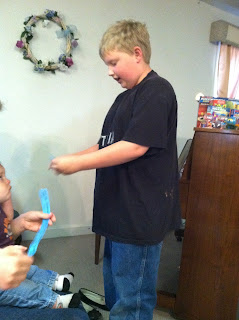 At the end of the night each child received one ticket for every verse
they had memorized during the year.  We then had an auction and the kids bid on toys, candy and pop with their tickets. 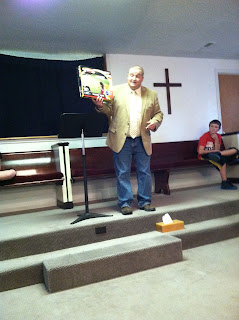 If my husband had not been called into the ministry
he would have loved to be an auctioneer so he had a great time getting the kids to bid.  The kids had a blast and got so much stuff!
Mr. Chandler and Mrs. Saraina will be taking over Wednesday Nights for the summer and teaching about the Life of Christ and how we need to walk in Jesus' footprints.  I am going to enjoy sitting under our awesome Pastor's preaching for the summer and will be spending lots of my time this summer putting the finishing touches on next year's Bible Adventures,
"Gone Fishing".  Gonna be another exciting year!