Today was Food bank day and our truck came loaded with extra plums, tomatoes and oranges.  We love our delivery guy because he is just awesome!  They are not allowed to return to the food bank with any food so he piles it in our truck whether we want it or not.  We had so much extra today that we decided to go find people who needed it.  We have our missionary friend from Indonesia visiting us and we also called a couple of teenage boys in our youth group and we started out! 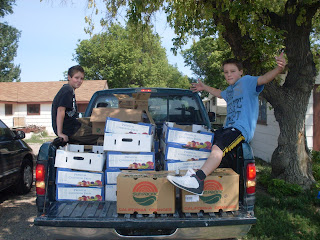 We live on the south side of town where most of the poorer people
live and there are trailer court after trailer court full of low income families.  We went just up the road and started knocking on doors and asking people if they needed any food.  After several houses we had the trailer court manager come and ask us to leave because we were soliciting.  We asked him why he considered giving free food to the help people soliciting but he just again asked us to leave because were soliciting.  Although we were heartbroken for these people we did leave. 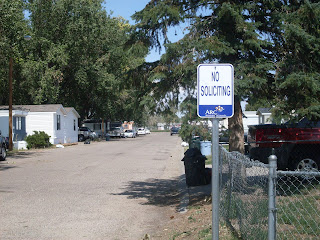 We then went across the street to another trailer park
and started handing food out there.  We met many, many older people who thanked us over and over again for the food as they said they were living on their Social Security and were barely making it.
We met a 93 year old man, an 87 year old lady, a Veteran on disability and many, many more people that were in need and so thankful for everything we were able to give them. 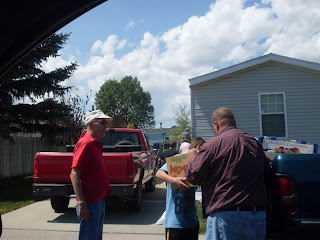 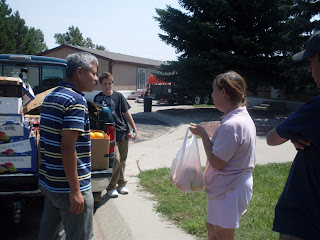 Of course with every box and bag of food we gave out we also gave out a tract with the plan of salvation.  (The manager from the other trailer park did not know we were handing out tracts or even where we were from, but seriously asked us to leave simply for handing out free food!)
We had one couple come out and talk to us and tell us they remember us from the last time we were out handing out tracts and grapes and told us how much they appreciated what we doing.

We met so many wonderful people that invited us back to their houses
and thus has given us the opportunity to go back and give them the gospel.  We are praying how we can reach more people effectively through food bank and be able to feed them not only physically but spiritually!  Praising God for this wonderful opportunity he has given us to do this!