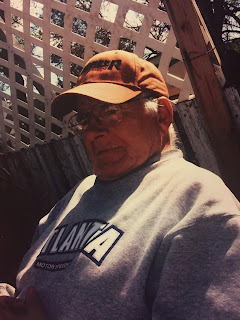 I had just pulled up to his house and Uncle Allen was sitting in the front yard in his wooden chair as he greeted me. "Hey!  You just missed Cookie."  I had no idea who he was talking about and tried to change the subject but he kept bringing it up.  So I finally asked, "Who's Cookie?".  He proceeded to tell me a funny story about Kae Dene and her coming to him with her face covered in chocolate from getting into and eating some cookies. He was smiling ear to ear as he told me about this sweet little girl that would follow him everywhere and how he had fallen in love with her.  That's the first time I noticed it, Uncle Allen claimed "Cookie" as his kid and he loved her as his very own.
As I thought back, I realized he did this with so many of his brothers and sisters kids. I could tell you conversation after conversation I had with Uncle Allen as he loved, worried over and rejoiced in his nieces and nephews.  As his brothers and sisters would keep him updated on their kids, their kids would become his kids.  Here are a few of those conversations that made the biggest impressions on me.

I remember when I was in Junior High, sitting at the kitchen table with him and grandma as I did my homework.  I was muttering and complaining about the work and I remember him telling me, "Look at Doug and Mark!  They worked hard to get where they are."  He proceeded with pride to tell me about what they had accomplished and what they were doing now because of working hard on their studies and he didn't want to hear me complain anymore.  You see, Doug and Mark were his kids and he was so proud of them and all their accomplishments.
It seemed often, when I would go into his house, he would be sitting there thinking about one of his "kids".  One day I asked what he was so deep in thought about.  He said had spent many years worrying about Michael.  So saddened that he had to have lost his father so young and everything that had happened since.  He then told me how that boy had a plan and a purpose and was overcoming his circumstances and he had a great future ahead of him.  He knew Michael would go far and was excited to see what he would do with his life.  You see, Michael was his kid and he wanted nothing more than for him to succeeded in everything he set his mind too.


I remember when Tawnya was having trouble with her first husband.  As I came into Uncle Allen's house, he was muttering and upset.  I asked him what was going on and he told me a little of what he was agitated about and said how he couldn't believe that anyone would be treating Tawnya like that.  He said, "Good thing she has brothers or I would have to go down there and take care of him myself.  I'll just let David and Kenny take care of it, cause if I go down there......" and he just shook his head because he was so mad.  You see, Tawnya was his kid and he was so protective of her.
I'll never forget the day I walked into the house and found Uncle Allen sitting at the table with tears streaming down his face.  I had never seen him cry before, even when grandma died, he hugged me and let me cry on his shoulder but I don't remember seeing him cry.  I asked him what had happened and as he continued to cry, he told me how his beautiful Jamie had left this earth way too early.   I cried too as we shared story after story about this beautiful blonde girl who had stolen his heart years ago.  You see, Jamie was his kid and he loved her and couldn't believe he'd lost her.
He always kept me updated on Dominic and bragged about his athletic ability in soccer.  He told me how he was doing in school and what his plans were for after school.  As Chep and I moved around for the military, he called me while I was living in Missouri and Germany to let me know how Dominic was doing as he served in the military too. You see, Dominic was his kid and he was worried about his safety as he was so far away from home.
Every time he mentioned Laura he would smile.  He said she had a rough couple of years but then she turned everything around and was raising an amazing young man.  Uncle Allen was so thrilled with Jacob and what a good kid he was and he always bragged about how smart Jacob was.  Whenever Jacob would come visit or someone would call to tell him how Jacob was doing, Uncle Allen would glow with pride as he told me what Jacob was doing next in his life.  You see, Laura and Jacob were his kids and he loved watching them grow up .
Although Patrick is my brother, Uncle Allen would still call me and tell me what Patrick was up to and how Patrick and Amy sent him steak or some other goodie in the mail.  If ever a month would go by and he hadn't heard from Patrick, he would call me to see where Patrick was and why he hadn't heard from him.  You see, Patrick was his kid and he wanted to know exactly what was going on in his life.
One of my favorite conversations was at a funeral a few years back.  We were standing with some of the family and they were holding their three year old daughter.  Uncle Allen asked if she could talk yet and when they answered she was talking a lot, he pointed at me and said, "This one scared me to death when she was three, she stopped talking one day and didn't say another word for a full year......"  It was a story I had heard him tell a hundred times, but I didn't mind because you see......... I was his kid and I knew how much he loved me.

Uncle Allen, my life has been forever changed by your wisdom, teachings and love and no one will ever truly understand how much you mean to me.  I love you and my life will never be the same without you, thank you for everything!
﻿
Posted by Amy-Marie at 5:10 PM