There are just those Sundays it seems like the devil is upsetting everything, as he knows there is a soul that is reaching out to God and he will do whatever he can to stop it!  That was our Sunday morning yesterday.  One of our Sunday School teachers was running late because her car had a flat and tore her dress trying to fix it.  In the confusion of it all, she left all her Sunday School material at home.  She did wonderful but the kids were a little bit hyper as class did not start on time and I think they saw that she was feeling stressed .
For services we had two new families visiting.  Praise the Lord!  Also a family that has been visiting the last few months joined the church and became members.  So exciting to see the church growing!
For Jr. Church we had 35 kids, which was actually low for us
but God knew!  We always start with song time and the kids were so good.  After song time we split the class in half and Mason took half to do craft time and the rest stayed for the Bible story with me.  Somehow Mason took all the quiet kids and left me with a room full of hyper, jumping off the wall kids!  (All the younger ones from the Sunday School class I mentioned earlier!)  I interrupted my story a dozen times to correct kids and try to get them to pay attention.
I do not think they heard one word of the story!
In the meantime, Mason was in craft time and since my lesson was on the stoning of Stephen we had the kids paint rocks with paint
(washable paint so as not to ruin clothes) and then after the rock was painted they were to write forgiveness on it. 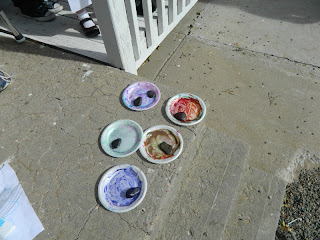 The paint did not stick to the rock, the paint got all over and the paint is not washable as it said on the package!  Mason poked his head in and asked me what to do.  I threw an idea at him and he took off and finished that group's craft time as best he could.  We then switched classes and the next group of kids was amazing and listened and asked questions and I was about to offer a salvation invitation when all of a sudden on the boys threw up all over!  As he threw up all the other kids started gagging and saying they were going to throw up so I rushed all the kids out of the main room into the craft room.  I ran into service and grabbed on of the bus workers, (It was one of our bus kids who had gotten sick.), and asked her to help the child and also to clean up the mess.
I ran to the craft room, which is very,very small, and found Mason at his wits end with so many kids in such cramped quarters.
I shooed all the kids out the door and made everyone stand on the ramp we have that leads to the one of the doors.  The kids fit perfect
and it was a way to keep them all contained! 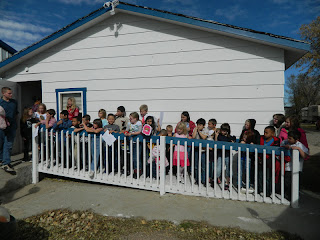 We then sang songs with them and took several group pictures
until the adults were dismissed from services.  Of course the adult service lasted longer than usual, my husband said was just about to offer the invitation when I came in to get help and it took everyone's attention and he had to rebuild to the point he was trying to finish with.  He said one of the visiting men was so convicted during the invitation he was clinging to the pew but did not come forward.  As I said before, the devil knew and did everything to make sure this man did not come to salvation.  By the time we dismissed I was physically and spiritually drained!
For evening services we were able to watch with joy as Judy, who had gotten saved several weeks ago, get baptized! 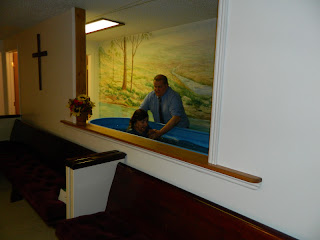 Praising God for this day, even with all the ups and downs but am fervently praying that next Sunday goes much smoother!
﻿
Posted by Amy-Marie at 2:05 PM