Wow, has it really only been twenty four hours since God
took us on an unexpected trip?  Last night on visitation Chep was feeling poorly and the ladies said they didn't think he looked good.  Later that night as he and I were taking a walk he started sweating profusely and had shortness of breathe.  A couple blocks later he could not breathe at all, had pain in his left arm and shoulder and was grasping his chest because of the pain.  I called Mason and he quickly drove to us and took us to the E.R.. 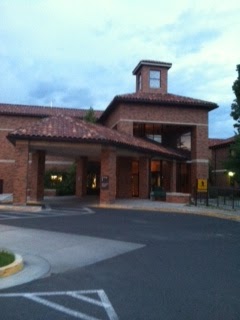 I love our VA hospital here because most nights there is no lines and no wait.  Chep was rushed in immediately and given nitroglycerin and an EKG.  The EKG came out negative and so started a battery of tests.  His white blood cell count was extremely high, his O2 was low and he was in a lot of pain.  At 2 a.m. this morning they admitted him so they could watch him and continue to run tests on him.  This afternoon we talked with the doctor and the surgeon and they both said how extremely healthy Chep was and that they and all their collegues were baffled as per what exactly was going on with Chep.  They said something was wrong but they didn't know why or what.  The closet thing they could guess was that Chep had a viral infection that had affected his cardio system and gave him symptoms similar to a heart attack.
He is still in the hospital tonight as they continue to monitor his heart
and try to keep his pain and O2 under control. 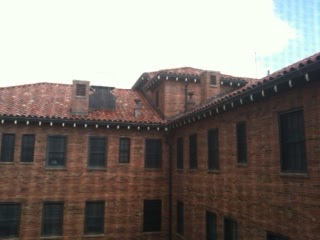 This was the veiw out Chep's window and I stared for many hours
at the unique architecture and roof tiles as I prayed.  I think there is a reason that the doctor's are perplexed at Chep's case and that is because there really isn't a physical problem but a spiritual problem.  One of our family members was actaully having a spiritual issue and Chep's near heart attack and illness was a sign, a reason, an answer to their prayer and mine.  We did not pray for Chep to have a heart attack but it definitely was the answer to a question that had been asked earlier that day.  I wish I could tell their story as it is amazing, but it is not my story to tell.  Chep is still in the hospital tonight but feeling much better.  They are waiting on a blood test to come back and for his O2 to go up before they let him go home but we are hoping he will be released soon.

We have such an awesome church family who not only
called and texted but also showed up at the ER to support us.  We had missionaries scheduled to come in tonight and a couple of the ladies took over my duties and cleaned the prophet's chambers and cooked dinner for them, such a huge burden off my shoulders!  Chandler and Mason have been in the ministry for so long that they easily took over for their dad and took special care of the missionary and made sure services ran smoothly. 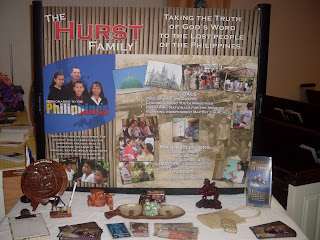 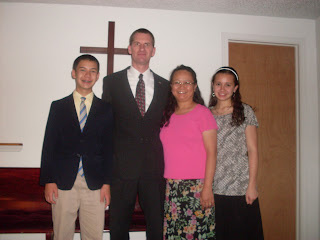 Our missionaries tonight were the Hurst family and they going to the Philippines.  Ivy is from the Phillipines and it was so exciting to hear how God has burdened their hearts to go there!

We are praying that Chep will be released tomorrow and that he gets a full night of rest and healing!
﻿